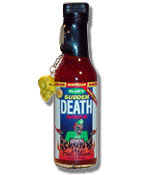 These past days I have been trying out a bottle of Blair's Sudden Death Sauce. I brought the bottle to the office and left it in the fridge. Since we have fairly decent caterers now, most days I'll have something for lunch that goes well with really hot sauce.

I have to say that this sauce has a very pleasant taste. Having no adequate vocabulary for describing tastes, I'll use an engineer's term: broad spectrum. (A colleague thought I was talking about penicillin). Rather than just having a sharp, piercing sort of heat, the Sudden Death Sauce also offers a very pleasant taste.

I let our resident Hungarian have a taste. Coming from a country where they grow and consume hot peppers (or paprika), I consider him more suited to judge the heat of the sauce. His verdict: -"not as hot as Dave's Insanity Sauce". I'll take his word for it.

I spent some time trying to find some numeric values to describe the heat in various sauces, but haven't found any solid numbers online. Given that the Scoville scale is (at best) an inaccurate one and commercial entities are not in the habit of publishing ASTA pungency figures I doubt I'll find anything more reliable than comparisons made by experienced chili tasters. (Not that I doubt their competence, but using the human sensory system suggests a high margin of error -- especially when venturing out into the culinary extremes).

Unless any of you propellerheads out there have a high pressure liquid chromatography rig knocking about the lab and want to compile a list? :-)

PS: Check youtube for people who try out various sauces :-)