Anything that happens before or after is just waiting... 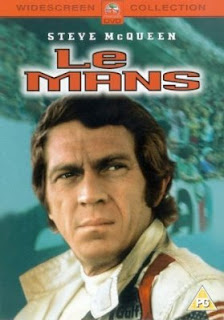 For any petrolhead, the 1971 movie "Le Mans" is a must-see. Steve McQueen went to great lengths to make this movie, but when it came out it tanked at the box office.

What makes this movie so great is that McQueen was very passionate about racing and was himself a very good racer. Also, it doesn't hurt that it is some of the best racing footage ever seen in a movie. Even by today's standards. There's a very simple explanation for that: it was the real thing.

The on-track footage was shot during an actual 24 hours of Le Mans race. I don't think the car they ran was officially part of the race, but despite having its aerodynamics and weight distribution compromised by the cameras on board (remember this was the 70s and cameras were big and clunky) and frequent stops to change film rolls, they finished ninth.

Rumor has it that despite not being allowed to drive in the actual race, Steve McQueen snuck into the car and drove (this being the irresponsible 1970s and all), but I haven't seen anything that categorically confirms this. In any case he was more than qualified to drive in the race.

The main car used in the movie was a Porsche 917 although most of the footage was shot from a 908/2 (which McQueen had driven in the 12 hours of Sebring).

If you know anything about cars, you probably know that this car was so crazy the Porsche factory drivers were terrified of it. Many of them refusing to drive it until the aerodynamics were revised and the car became a bit more stable at speed. This was a terribly fast car. The top speed of a 917 was just north of 400 km/h at the end of its lifetime. With the turbos turned up all the way it could develop 1.580 hp (qualifying trim) and it was raced at about 1.100 hp (race trim), though the version shown in the movie was probably around to 580 hp. That sort of power in a car weighing about 800kg makes for a wild ride.

I can't remember the speed they achieved down the Mulsanne straight in the 917, but one racing driver described it as being a "white knuckle drive". Usually the Mulsanne straight was the part of the track where drivers could rest and check their instruments, but the 917 was so terrifyingly fast that what used to be just a straight became a real challenge because of the kink in the middle. (Eventually a chikane was added to the Mulsanne straight to reduce top speeds).

As mentioned earlier, the "Le Mans" movie was perhaps a bit narrowly focused. The first 38 or so minutes of the movie has no dialogue. Still there's a great quote that you may have seen before from the movie:

"Lotta people go through life doing things badly. Racing's important to men who do it well. When you're racing, it's life. Anything that happens before or after is just waiting."

Here's a clip from the movie: