Whenever I have to deal with government bureaucrats I get a strong urge to break something expensive in a loud and visually impressive manner. It is so obvious that they take great pride in doing things by the book -- "the book" that was so obviously written by halfwits. 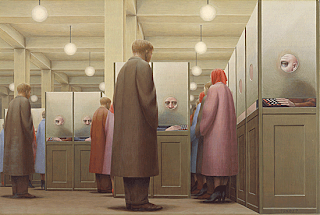 Last week I got a nasty letter from a particularly inefficient government agency threatening to send the police after me to collect my license plates. As an experiment I figured I'd try to change the registration on a vehicle by mail rather than wasting an afternoon waiting in line. Big Mistake. Of course, the workflow got stuck somewhere and the procedures and form letters obviously failed to communicate exactly what the problem was. So I had to turn up in person to learn where the ball had been dropped and then put it right.

Would it have killed them to drop me an email or actually write what the problem was in the nasty letter they sent me?

Also this morning I found an email from another government agency. With much fanfare they had let it be known that they were now entering the Web 2.0 age and had created a set of web services to expose some of their services. In a fit of sheer optimism I sent them an email and asked for access (automated, self-service signup is obviously too scary for them since it could possibly mean some simian manning a desk might have the scope of his or her duties reduced, and we can't have that, now can we? The useless have a right to employment!). Today I was, in essence, told to sod off since I was not one of their "partners".

Partner!? Why the hell would these APIs be limited to "partners"!? I gladly pay my taxes and this nonsense is what I am expected to put up with?

(The painting above is called "Government Bureau" by George Tooker -- one of my favorite painters)
2 comments: