Tonight Ståle and I set out to assemble the CNC machine.  Before starting we had a large pasta meal with all the trimmings.  Then we cleared the table and laid out all the parts.  From time to time I grabbed my camera and took some pictures, so the guy you see in the pictures is Ståle. 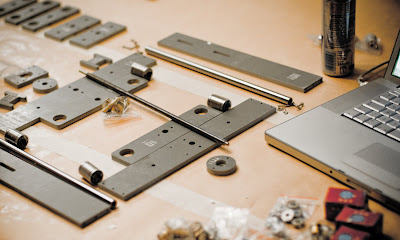 We started by assembling the Y-axis, which controls the back and forth movement of the table.  We had to somehow fit all the bearings into some very tight holes and unfortunately I do not have a hydraulic press in my appartment so we had to solve it with a bit of ...uhm...creativity. 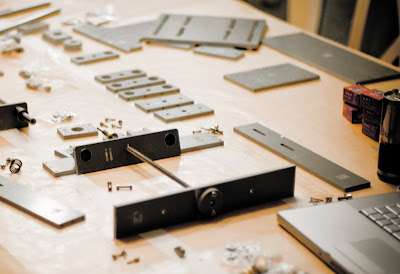 Below you can see most of main parts o the Y-axis being assembled.  The good thing about building something from scratch is that it gives you a chance to understand the details of the machine.  For instance it becomes relatively obvious why the anti-backlash nuts are needed.  (From US patent number 4210033: "An anti-backlash nut is disclosed of the type which undergoes translational movement along a screw in response to relative rotational movement between the nut and screw. This anti-backlash nut has oppositely-directed longitudinal flexure members radially biased towards the screw to provide equal drag torque and minimum relative deflection for travel of the nut in either direction.") 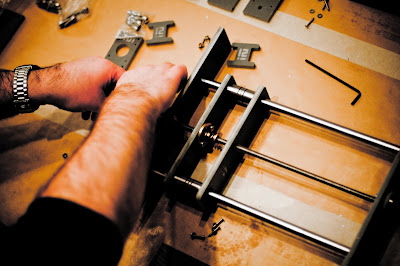 With the Y-axis assembly done all that was left was bolting on the table. 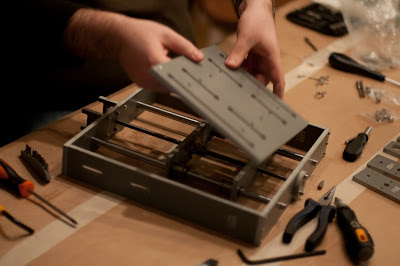 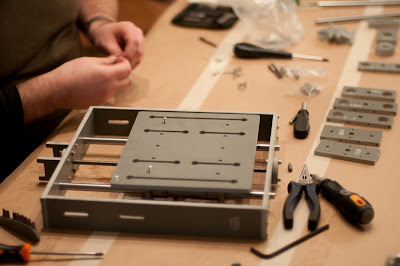 Next up was the X-axis. 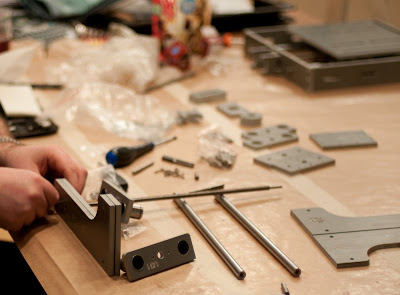 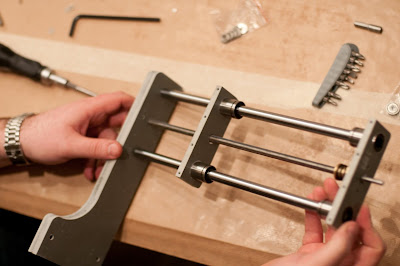 Back-plate of the X-axis in place as well as the front plate for mounting the Z-axis.  Ståle can be seen in the background. 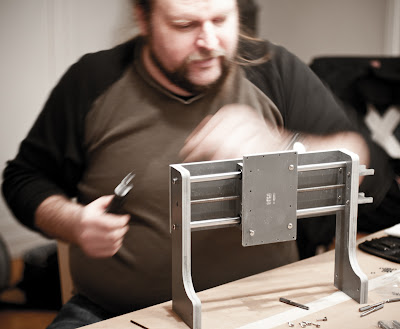 Gantry placed on top of the base just to check that everything fits.  Next up was to build the Z-axis. 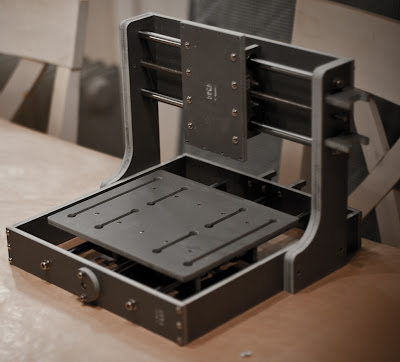 The Z-axis is just the same as the X- and Y-axis, only smaller. 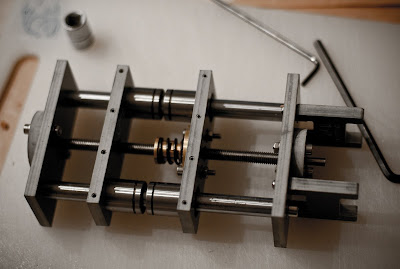 When mounting the Z-axis I somehow managed to put the thing upside-down;  with the motor mounts pointing downward.  We quickly rectified the problem and here you can see all axis mounted correctly, with the Z-axis motor mounts facing upward.  (Funny, we didn't drink that many beers...). 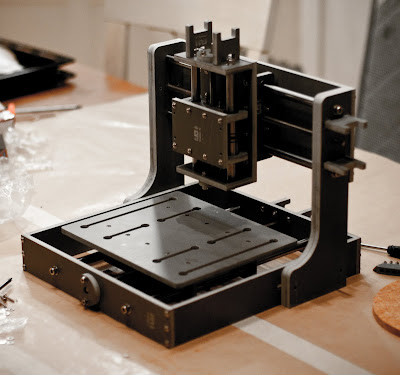 Finally, the whole thing with stepper motors in place and the gantry bolted onto the base. 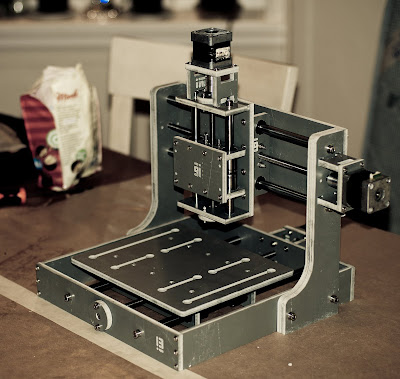 Total build time was something like 4 hours, a couple of cans of beer and a can of Red Bull.  Some time was lost due to an Ocicat that needed attention every 10 minutes.

The one thing that is a bit worrying is that the lead screws need a bit more force to turn than I had anticipated, but I see other people worrying about this as well, so I guess it is normal.  Since the X-axis seems to be the axis that needs more torque to be turned I guess we will wire that up first and see if the stepper motor has any problems.

The stepper motors that are fitted to the CNC machine are a bit larger than those I got from Sparkfun.  I guess if these prove to be too weak I'll find some more powerful steppers.

Next up is to hook up the steppers to the stepper drivers and do some simple test runs.  Mostly just jog the steppers along each axis and grease up the lead screws and the rods so everything runs smoothly.  I guess I will have to hack up some software for the Arduino and possibly create some sort of test interface in Processing.