One small step for man. 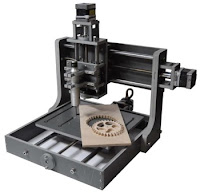 I am currently building a CNC mill -- one small step at a time. A lot of people ask me what I need a CNC mill for: I don't, but I thought it might be a fun project to learn about controlling machinery, programming microcontrollers and learning a bit of electronics. If I get a working CNC mill out of it: great! If I am able to build something that works with any reasonable precision it means I'll be able to mill stuff that I can draw -- which might come in handy for my other hobbies.
It also struck me that if I replace the milling head with what is in practice a glorified glue gun I can probably find some way to turn the thing into a 3D printer, but we'll investigate that opportunity if and when I get a CNC machine working properly.
Yesterday I finally hooked up my EasyDriver v4 stepper motor driver to my Arduino Mega. I soldered riser pins to the connections on the EasyDriver so I can mount it on a breadboard and access all the pins that are broken out. I used the pictures from Daniel Thompson's tutorial on hooking up an Arduino to an older version of the EasyDriver plus some other tutorials as a guide.
After writing a short test program to generate pulses for the stepper and setting the direction pin I got the motor moving. Before hooking it up to the 12 volt regulated power-supply from which the stepper should be driven. Hmm, that's odd. Either I have done something wrong or I didn't understand how the EasyDriver works. It can't be good if the stepper is driven from the Arduino power.
In any case, from here on I need to be a bit more structured and keep proper notes of what I am doing. I should probably use Fritzing to document how things are hooked up so I can get some input on what I am doing. After all, I am a software person and I really know very little about electronics.
I did some experiments with the stepper to see how it behaved. From Thompson's tutorial I gathered that if you pulse the motor more frequently than every 200 microseconds it will stall -- which I verified. I just halved the period and it did indeed stall. The code to perform nSteps steps looks something like this:
It can't possibly be that simple :-).
I am not entirely convinced that a constant pulse frequency is what you would want to feed the motor in all situations. Since we are talking about physical objects that have inertia I would assume that you need to account for acceleration and thus have a way to ramp up and ramp down the pulse frequency. I also suspect that the motor will be more prone to stall at low revs or from a standstill -- meaning I can probably pulse it faster than 5kHz once it is up to speed.
I hope that the books I have ordered will contain some answers.
My current assumption is that I should use the Arduino to implement some sort of high level interface (G-code?) which can be reachable via a serial connection. I have seen people use the parallel port of their computers to pulse the stepper drivers, so I could of course go down that route. However, using a serial connection and offloading the work to the Arduino seems much more elegant.
My short term plan:
Anyway. I have a lot of learning left to do. What great fun! :-).