A brisk stroll down memory lane.

As I was feeding the shredder with old bank statements and expense reports I spotted a receipt that brought back fond memories.

A few years ago I was in Courmayeur skiing(*). I suddenly found that I needed to be in California 24 hours later -- for some meeting I can no longer remember.  So I needed to get from Courmayeur to Geneva.  In a hurry.  I asked the receptionist if she could arrange for a taxi.  I jokingly said "get a competent driver".  She nodded.  I thought nothing of it.

The driver turned up a bit later.  A man in his mid 70s who only spoke Italian save for a few standard phrases in english.  The car was some french minivan piece of junk.  I glanced worriedly at my wrist watch.

I have spent some time driving various forms of machinery and have a fairly good grasp of what it takes to cane a car around a track.  The choice of lines, the choice of gear, how you downshift an un-synchronized gearbox while braking etc.

As we headed out of Courmayeur I noticed that the taxi driver was using heel-and-toe technique.  Which was curious as the french donkey-cart no doubt had a perfectly modern, well-synchronized gearbox.  As we picked up speed his choice of lines through the curvy alpine roads was impeccable.  He did not lift unless he had to, he used every inch of usable road, and despite there being patches of ice here and there, kept the car together and balanced.  Precise, flowing moves.

Somewhere after the Mont Blanc tunnel an M3 cut in front of us.  I heard a faint curse, he switched the front lights to high beam and placed the nose of the miserable french car almost in the back seat of the bavarian masterpiece of automotive engineering.  He was not happy.  This driver was not worthy.  He would have to be punished.

Now, ordinarily you would think that an M3 with....what 350 or so ponies under the hood would outrun the french shitbox easily.  Probably, but the guy in the M3 was a mediocre driver at best;  and the italian gentleman next to me seemed to think he was Tazio Nuvolari.

After a few kilometers the M3 driver misjudged a sequence of corners and had to brake.  The taxi driver never took his foot off the throttle.  There wasn't much to floor, but he kept his foot down.  His left wheels were outside the white line on the opposite side of the road before turning in, collecting the apex and heading out again.  Minutes later we could no longer see the headlights of the beemer.  Gone.  Foot still planted to the floor.

The trip was supposed to take over an hour.  I can't remember exactly how long it took, but I can remember being shocked at how quickly we had gotten there.  As well as a bit disappointed that the brilliant display of driving skill had come to an end.

I paid the man €230.  As I handed him the money he saw my membership card for the local Alfa Romeo owners club in Norway.  He smiled. 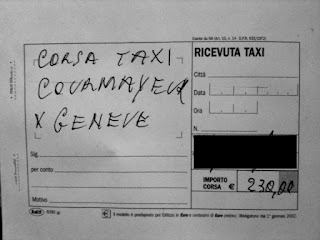 The best €230 I have ever spent in the name of scalable computing.


(*) When I say "skiing" I am exaggerating greatly.  I was learning how to snowboard.  And I wasn't doing well.  I repeatedly fell down the mountain whilst dressed up like a stuffed sausage.  But it was fun.  All 8 hours of it.  The following 3 days ... not so much.  I was in pain.