People keep talking about Web 3.0 expecting the sort of significant shift that Web 2.0 represented.  I don't expect there to be one.  I view Web 2.0 as the transition where certain aspects of the web "went hockey-stick".  Where certain potentials already inherent in the web were realized -- mainly that it went from being a one-way medium to a many-to-many medium.  Also we saw the emergence of businesses that "get" the web.  But also small things like Firefox challenging Microsoft and bringing actual progress back into the stagnant world of web browsers. 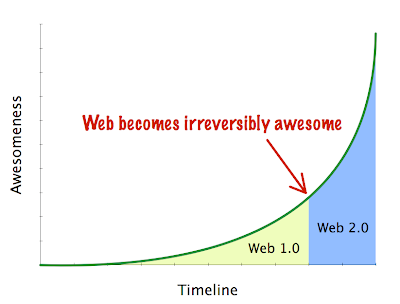 The Next Big Thing.

So what is The Next Big Thing?  The next significant shift?  I think it is about the physical world.  About machine to machine communication, about "dumb" devices becoming "smart", or lacking that, connected.  About sensor networks, remote control and about everyday devices interacting with each other in useful ways across vendors and types of gadgets.  About devices and gadgets becoming addressable in sensible ways.  About connectivity coming to devices that we previously thought of as too cheap or too small for it to be cost effective to put communication and processing capabilities into them.

Very little of this is new.  Machine to machine communication is already an established art, but it has lacked openness and the right sort of mindset that is needed to fuel explosive growth in the consumer market.  It is still a specialty field.  And connected devices are still somewhat of a novelty.

If you consider trivial examples such as your pulse monitor.  You have a sensor you place on your body and a watch that can accept data for storage and processing.  If you work out at a gym they might have a treadmill that can accept the signal from your sensor, but that's about it.  Nothing else talks to it.  If you want your mobile phone to interact with the sensor you need to do a bit of hacking.  And it isn't for everyone to design their own electronics, figure out the protocols and write their own software to do this.

Various makers of home entertainment systems have had systems for allowing their devices to interact for years.  Sony, Bang & Olufsen etc. The TV, DVD player and amplifier can talk to each other, albeit in crude and limited ways.   We've had this for at least 25 years now.  But it hasn't really taken off.  Because every manufacturer only offers interoperability between their own devices.   Which isn't terribly useful as you are likely to have a mish-mash of different devices from different manufacturers bought at different points in time.

Most everyday devices capable of interacting wirelessly exist within closed ecosystems.  Closed proprietary protocols, and when the protocols are indeed "open" they are usually special purpose or they are designed by committees that produce bum-numbingly boring specs that most people would rather not play with.

As far as the hardware is concerned, you would be amazed how cheap processing power has become. Texas Instruments have some microcontrollers that cost $0.25 apiece.  Low power communication hardware for wireless networking are getting ridiculously cheap as well.

If I may go off on a tangent here for a while; the qualities of a standard or a spec matter greatly.  For it to be useful to a big audience it has to be brief, concise and precise.  What it describes also has to be simple.  Any excess fat must be trimmed.  It is extremely important that the spec is written from the point of view of someone who has actually implemented what is described.   SMTP, HTTP and even TCP/IP didn't win because they were the best possible protocols -- they won because it was practical to implement them.  Because they were simple enough.  X.500 and the OSI stack were not, and quite deservedly starved to death from lack of enthusiasm.

If a spec is not usable as a practical blueprint for someone building or implementing the spec, it is not a useful document.

Also, the format matters.  Again, look at the standards that make up the bulk of basic Internet technologies.  They are text files.  Now compare to some of the more unwieldy standards and specs of today that are maintained as big, fat Word documents.  Often horrendously badly formatted Word documents at that.   There is a number of reasons why word processing files are not suitable for authoring specs and standards.  However the minutiae of this is a topic is beyond the scope of this blog posting.

If you want a good example: compare the SAML specs (http://saml.xml.org/saml-specifications) with the OAuth specs (http://tools.ietf.org/html/rfc5849).  No, really, have a look and see which you would rather work on.

Clarification: I think SAML is a good idea.  But it is a pain in the butt to work with because of the massively big, badly written specs.

For instance, I have been playing a bit with mesh-networking and the XBee devices.  They are interesting devices, but to be quite honest, not very easy to work with.  The manufacturer does not really understand the potential of their product and have not paid much attention to making it easy to configure them.  If you want to configure an XBee device you'll have to set aside a few evenings to study the docs.  Then you will need to figure out how to work around their worthless, Windows only configuration program.  It takes a lot of trial and error to figure out how to work around the dysfunctional and confusing configuration software and I would assume that it is probably better to write your own software for this if you plan to spend much time working with it. However, there is hope.  As advanced microcontrollers have become cheap there are some brilliant solutions available.  Chief among them is the unassuming, but all-important Arduino.  The Arduino is the first wide-spread prototyping platform that makes hardware truly accessible to the masses.  It has three things going for it.  First the hardware:  it is cheap, offers adequate processing power, lots of I/O and the physical interface is exactly what a tinkerer needs.

Second is the software.  While the main IDE used with Arduino is aimed at non-programmers, you can still elect to take a more "traditional" route if you prefer that -- using avr-gcc and traditional C programming tools.  To help beginners (and more experienced hardware hackers) along there is also a large library available for the Arduino.  For doing anything from driving displays to driving servos.

Third, the Arduino has a vibrant community around it.  There is an abundance of forums, howtos and people who are willing to share their knowledge.  If you want to hack hardware using an Arduino you can accomplish a lot of fun and interesting things by participating.

The Arduino isn't important for the consumer in much the same manner as Java, PHP, Linux or MySQL is unimportant to the users of the web.  It is important for the people who innovate, tinker, build and invent.  It significantly lowers the barriers for prototyping hardware solutions and it has adequate I/O and processing capabilities to accomplish interesting things.

Interestingly Google has recognized this and are now using the Arduino as a platform for their Android Open Accessory Development Kit.

Right now the Arduino is one of the most important gadgets on the market.  Because it significantly lowers some important barriers.

As I said earlier, I do not believe there will be a Web 3.0 in the sense that we will see a marked shift.  There is perhaps a Web 2.5, which is "more better" and the combined fruits of Big Data and machine learning, but I don't see any distinct shifts for the web as such up ahead.

I think the Next Big Things is having gadgets talk to each other and that this is done using technology that is far more available to the masses than is currently the case.   The key to this is simplicity, and in the electronics industry, the winners will be those who realize that to fully exploit this opportunity they have to re-think who their target audience is.